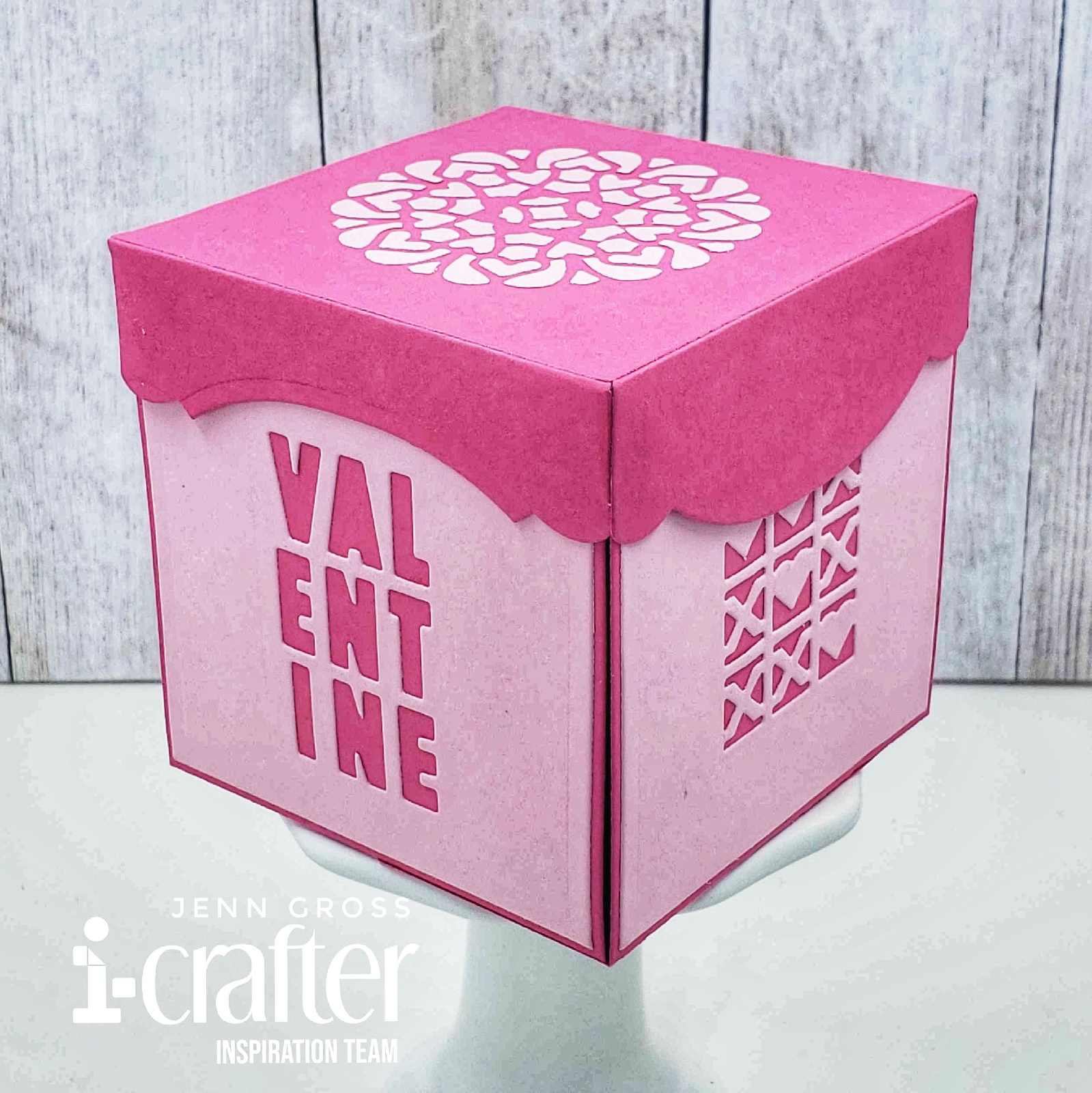 Hello my crafty friends!  I have a super fun interactive Valentine box with an unexpected surprise!  Lift the lid and you will find what is called and exploding box!  The side drop down revealing another surprise inside! 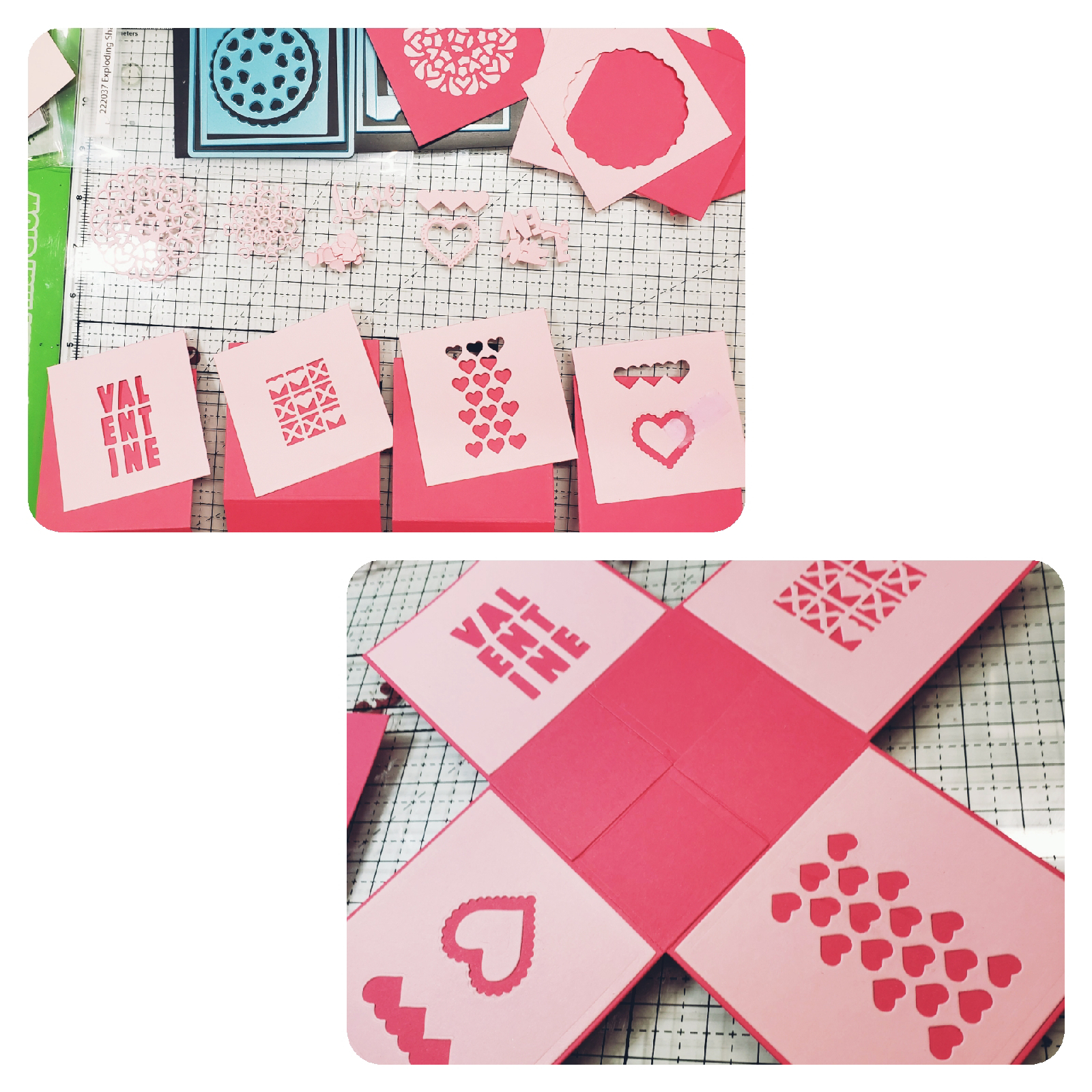 Start with the Exploding Shaker Box by die cutting four box sides form dark pink cardstock. assemble the box by gluing the bottom flaps together.  Create four side panels from light pink cardstock and die cutting the Impossible Box Valentine Add-On dies for the added panel designs.  Glue one panel onto each of the outside of the four box sides. 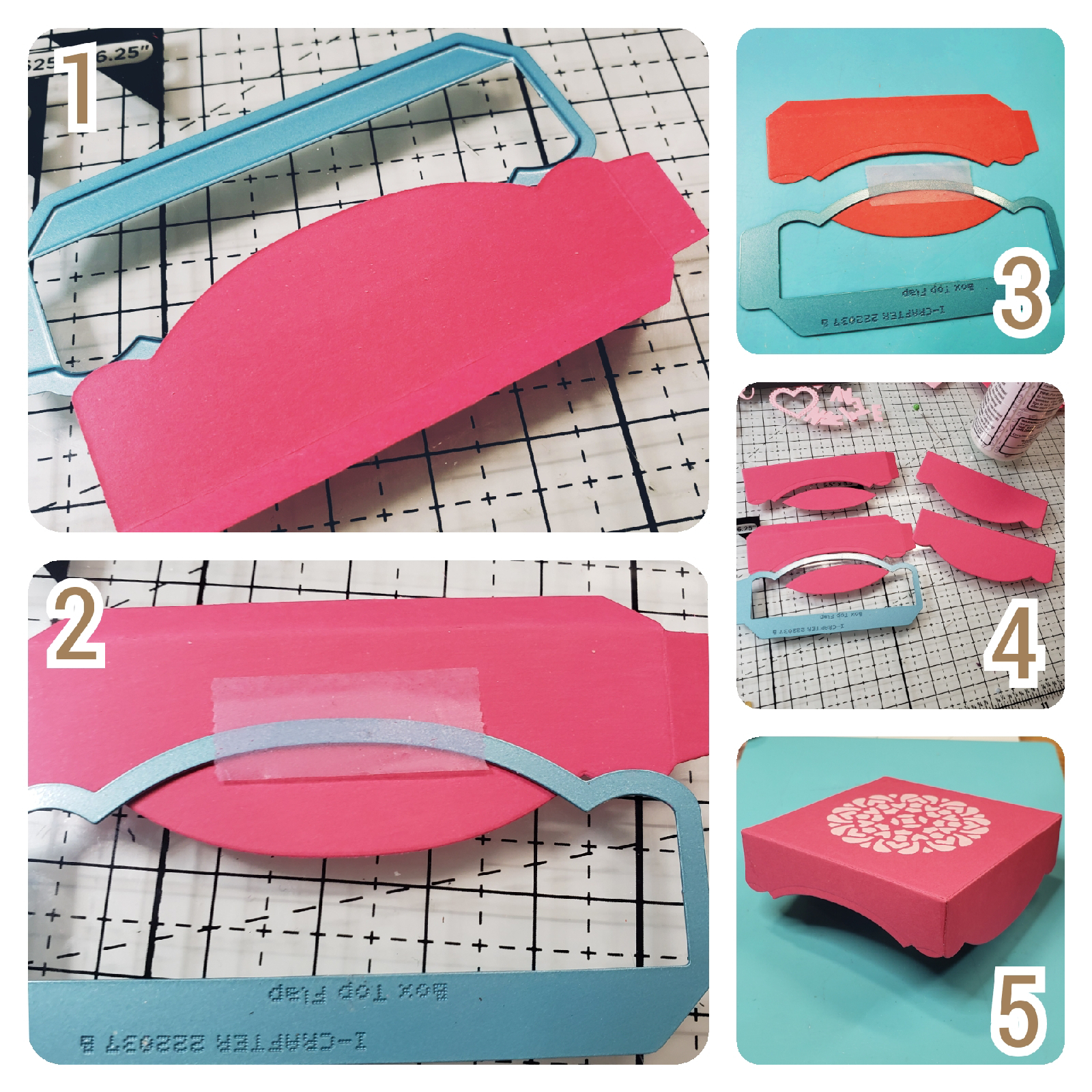 1 – Die cut four box lid sides and one large square form dark pink cardstock for the Exploding Shaker Box lid
2, 3 and 4 – Use the box lid die to cut off a curve on two of the box lid sides, making an inverted scallop edge as shown
5 – Use the decorative lace circle die from the Impossible Box Valentine Add-On dies and glue the negative of the design to the middle of the dark pink box top and glue the 4 sides into place making sure the two matching inverted scallop edges are opposite of each other.  Die cut a light pink square (a second box top) from light pink cardstock and attach it to the inside of the box lid to add a finished look covering the exposed box lid flaps
This completes the outside of the Exploding Shaker Box and Lid Next we will work on the inside of the shaker box
6 – Die cut two side pockets from light pink cardstock and secure them across from each other on the side flaps
7 – Die cut the three conversation heart dies twice from three different colors of cardstock. Glue the two matching hearts together. Use one of the cardstock open hearts to draw and fussy cut solid hearts from each of the three colors of cardstock. Glue the solid hearts behind a contrasting color conversation heart as shown.
8 – Die cut two white heart ribbon strips from white cardstock and one heart ribbon strips for the purple and light pink cardstock 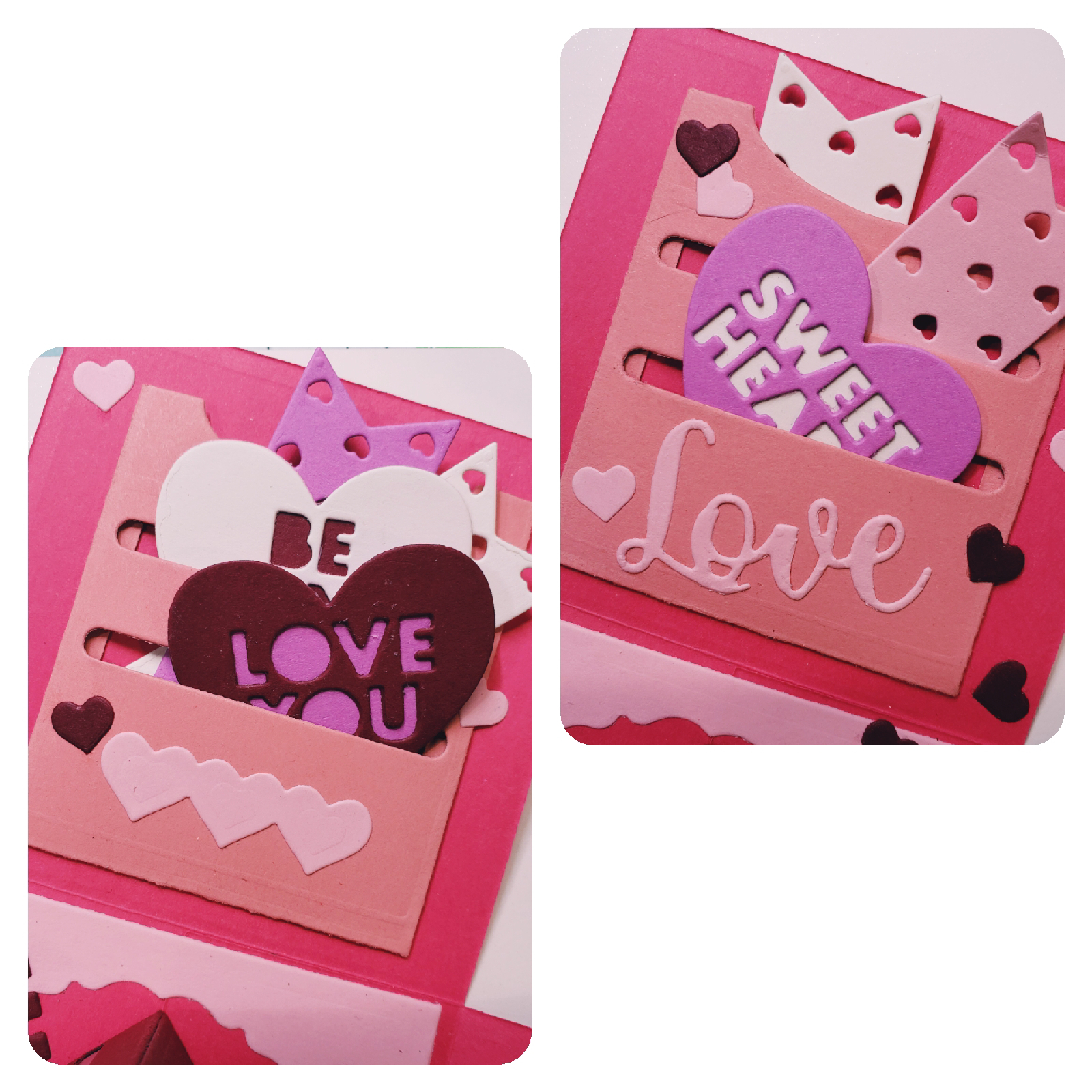 Assemble the two pockets as shown above. 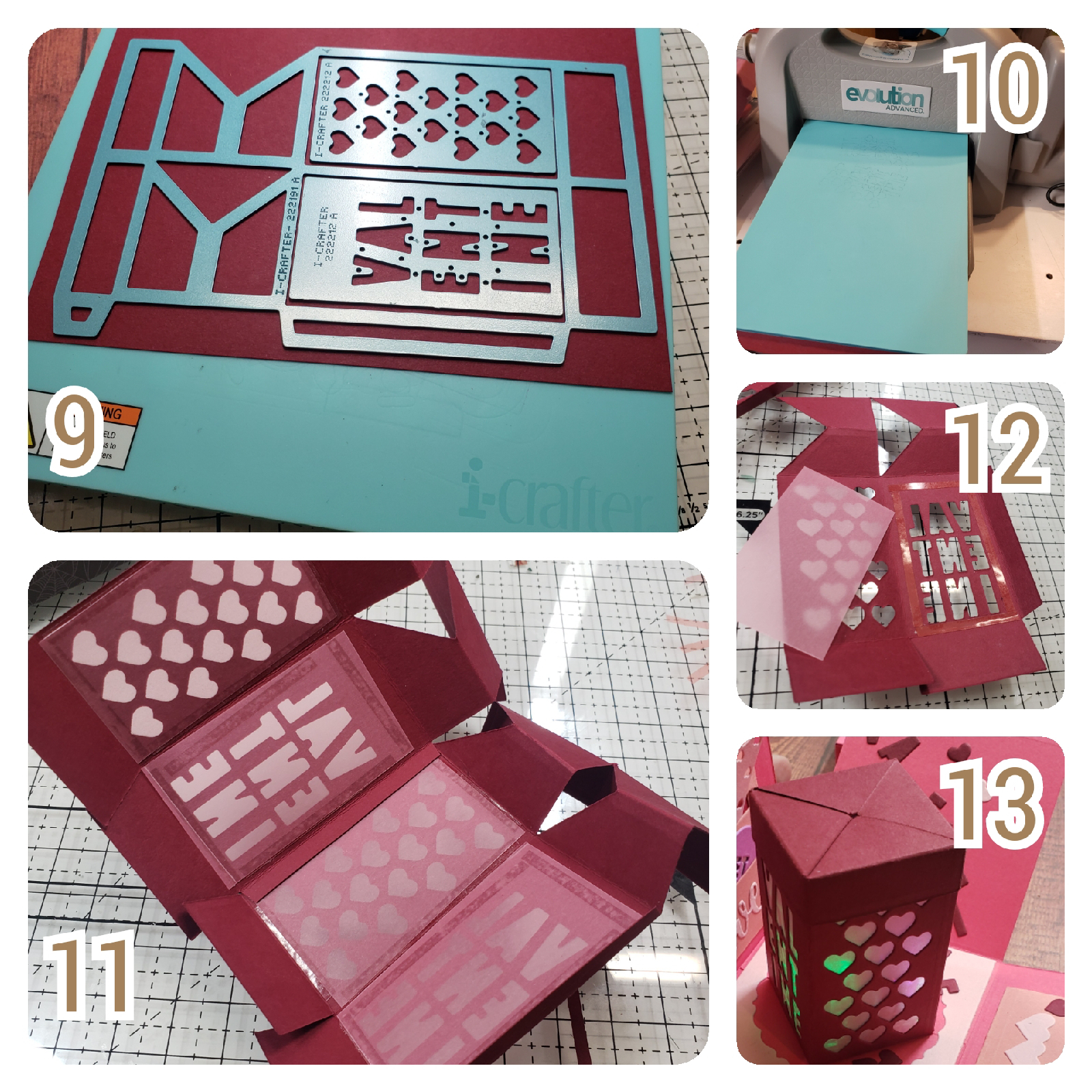 9 and 10 – Using a dark red cardstock, die cut two pieces of the Impossible Box sides with the Impossible Box Valentine Add-Ons inserted as shown and save the small hearts and the letters from the word Valentine to use later.  I have been using the i-Crafter Magnetic Pro Cutting Deck to cut out all my cardstock pieces. Fold the two box sides on the score lines
12 and 11 – Use strong adhesive tape or glue to secure the two box panels together. Measure and cut pink vellum and glue on the inside of the Impossible box panels
13 – Glue the final box side together.  Glue the bottom of the box closed.  Push the box lid into place and glue the lid side together.  Glue the completed Impossible box to the bottom inside of the Exploding Shaker Box 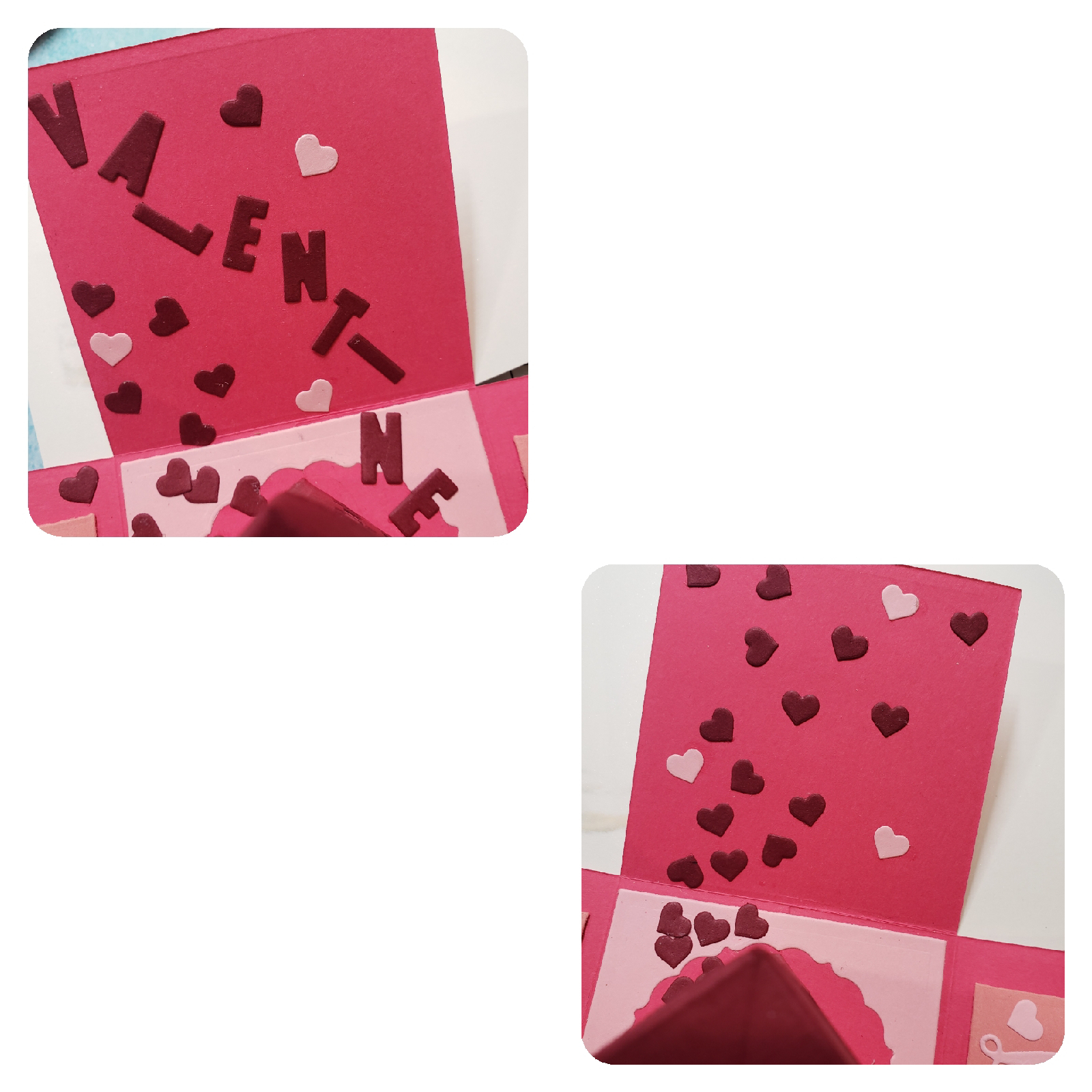 On the two blank inside panels glue down the small hearts cascading away from the Impossible Box. On the other blank side, glue the word Valentine in a tumbled fashion as shown above.  Glue few light pink hearts to complete the box design. 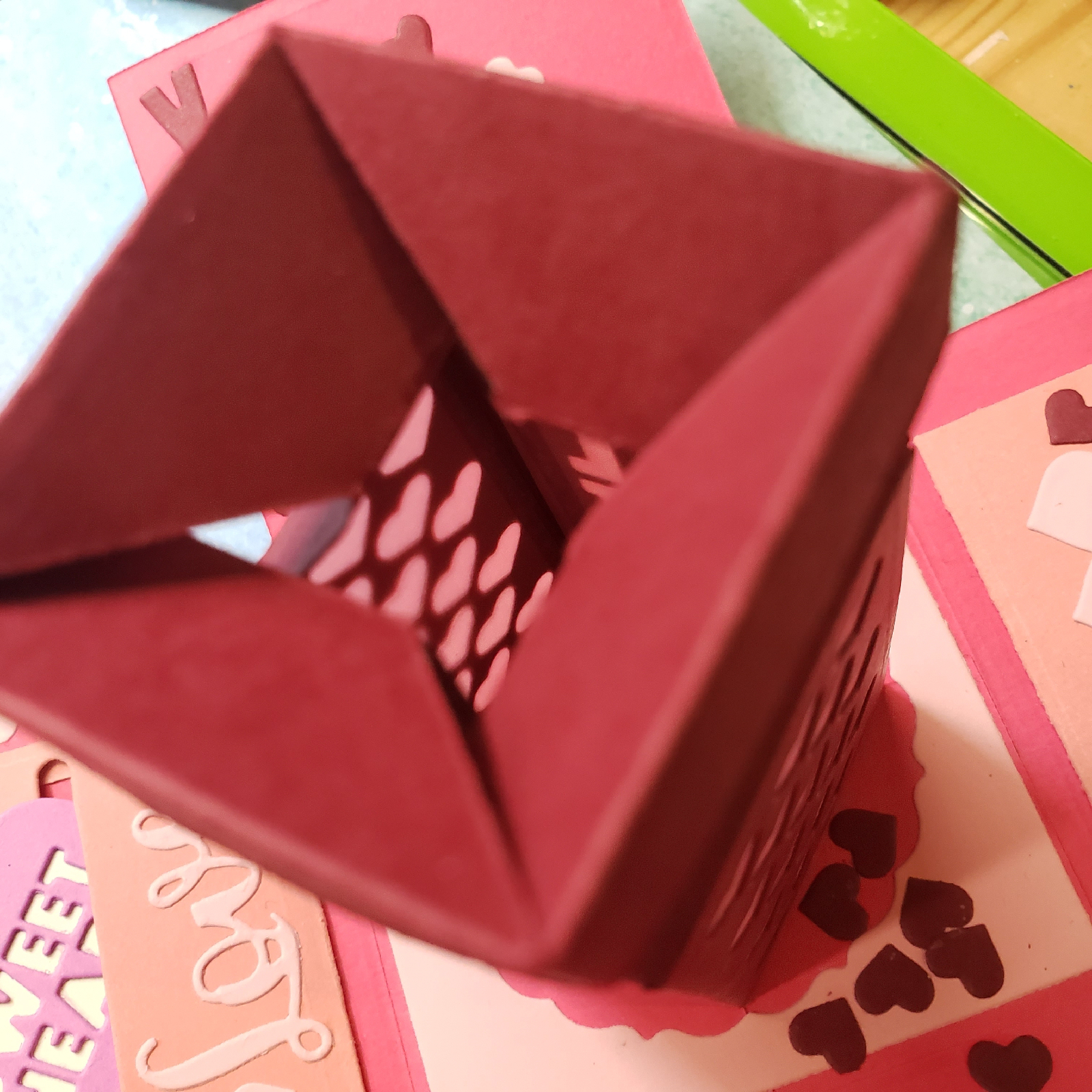 You can add a battery-operated light, candy or even jewelry inside the Impossible Box for your Valentine Sweetheart. You can see an added light in the photographs below. Thank you for stopping by and learning how to make this Exploding Valentine Box.  I love hearing from you so leave me a message tell me what your favorite i-crafter die is!   Let me know if you have any question!

For more inspiration, updates, and news make sure to check out these awesome places!

Thank you so much for stopping by today!

This site uses Akismet to reduce spam. Learn how your comment data is processed.

We are a company inspired by crafters, for crafters. We believe that making with our hands is good for the soul. We want to inspire and encourage others to explore their creative talents. Let’s make something together.